It refers to the supreme intelligence as the power of understanding and unbounded reason. Compare this to the buddhi of individual beings with limited understanding and bounded cultured reasoning. It is called Mahātattva meaning the great principle and it is more like a wheel or trigger, that starts to roll out the process of creation of which buddhi is the first identifiable factor or entity.

The devatā associated with this as manifesting in the life of the individual creation always have the prefix ‘Mahā’ associated – like Mahāviṣṇu, Mahāgaṇapati, Mahādeva (Śiva as worshipped by Brahma for successful creation), Mahādevī, Mahā Sarasvatī etc.

Hiraṇyagarbha sūkta associated with the Mahātattva is in the Ṛk Veda 10.121. The word hiraṇyagarbha literally means ‘golden fetus’ and is the source of creation of the Universe or the manifested cosmos. Garbha (conception) is associated with the sexual organs and therefore, Bhṛgu was very wise to advise the worship of Mahādeva and Mahādevī in the Liñga which is symbolic of the coitus of all creation. In jyotiṣa, the lagna is the seat of buddhi, the innate intelligence of the creature, yet it is beyond the control of the lagna. This brings about a strange link between the lagna of conception and that of birth as the buddhi must be in opposite signs symbolizing head and liñga (organ).

Buddhi is a feminine Sanskrit noun derived from the root budh meaning to be awake or conscious, to understand and to know. Buddha is its masculine form. Buddhi is the discriminative faculty of mind which gives the power of viveka (discrimination power to see truth from falsehood and that which causes wisdom). It plays the pivotal role in salvation within Orthodox Christianity, Buddhism and Hinduism. It is the key to liberation (mokṣa) or enlightenment (bodhi, jñāna yoga). 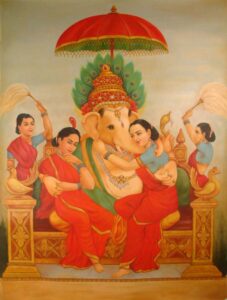 Gaṇeśa, the wise god has two consorts – Buddhi and Siddhi, which brings out the feminine nature of the Buddhi concept and as one that serves and is most benevolent. In that sense, hiraṇyagarbha also serves the benign purpose of creation of this universe and we have images of Ardhanārīśvara Śiva-Pārvatī combination symbolizing the union as Śiva liñga. These are birthing concepts related to the universe.

We will examine these concepts in the first chapter of Bṛhat Parāśara Horā Śāstra. At his stage, we give a glimpse of what some of the texts have to say.

The Matsya Purāṇa (2.25-30) stats that after Mahā pralaya (pralaya associated with this Mahā level or Mahātattva was destroyed and all creation ceased to be) there was complete darkness. It was night (sleep time) at the avyakta realm and when the new day dawned and it was time to create a new Brahma, then Svayambhu, the Self-manifested Being arose and created the primordial waters first before establishing the seed of creation into it. This Svayambhu is beyond the comprehension or any experience of the senses and based on this information, Svayambhu is definitely associated with or is the lord of the avyakta realm.

Svayambhu is called Sambhu or Sāmba in short and this refers to the highest form of Śiva, the concept Maharṣi Jaimini associated with Jupiter, called Sāmbaśiva (Sāmba Sadāśiva). Svayambhu must be nirguṇa (without guṇa or beyond guṇa) as the guṇa have not yet come into existence and nirākāra (formless) as forms come into consideration much later after Agni comes into existence.

The Matsya purāṇa states that since Svayambhu entered the egg after creating it in the ocean, he is Viṣṇu (based on one etymology of the word). This is supported by the Brahmāṇḍa purāṇa which states that since he pervades the egg, which expands into the universe, he is Viṣṇu (sarva-vyāpakeśa – present everywhere). Nārāyaṇa Sūkta states that everything that is, visible or invisible, all this is pervaded by Nārāyaṇa within and without. Hence Nārāyaṇa is nirguṇa, nirākāra and is Svayambhu. The name Nārāyaṇa refers to the creation waters and has a double meaning in the objective of human beings – (nara + ayana). This statement is countered by the Iśavasya upaniṣad proclaiming that Iśvara (Śiva) is the one both within and without it, moving and unmoving, far and near, and within and without. The Bible calls ‘Svayambhu’ the Holy Father of all creation. The prophet declares him to be Allah.

Manu Smṛti has made a very apt observation –  In the beginning, all this existence was undifferentiated, unmanifested, indefinable, unarguable and unknown in every way. From this unknown condition arose the nāma-rupa saṁsāra (Universe of ‘name and form’ because of Svayambhu, the self-existent creator. None know that one ‘Svayambhu’ and everyone is simply speculating, for if they knew they would be jīvanamukta and too far removed (detached from world).

Every religion has a different name and different form for Svayambhu just to satisfy the needs of their followers. The highest philosophies declare that this one is beyond guṇa and hence beyond the reach of the senses. Therefore to attain oneness with him or his abode, complete freedom from the sense organs is a must. This is the concept of bandana (bondage) and mokṣa (emancipation). However, this is not a sufficient condition as there is the other attribute of nirākāra and therefore one must become free from ‘form’ which in every sense is the jīvanamukta state.

Translation: In the beginning was the Divinity in his splendour, manifested as the sole Lord of land, skies, water, space and that beneath and He upheld the earth and the heavens. Who is the deity we shall worship with our offerings?

Translation: It is He who bestows soul-force and vigor, whose guidance all men invoke, the Devas invoke whose shadow is immortal life and death. Who is the deity we shall worship with our offerings?

Translation: It is He who by His greatness became the One King of the breathing and the seeing, who is the Lord of man and bird and beast. Who is the deity we shall worship with our offerings?

Translation: It is He through whose glory the snow-clad mountains rose, and the ocean spread with the river, they say. His arms are the quarters of the sky. Who is the deity we shall worship with our offerings ?

Translation: It is He through whom the heaven is strong and the earth firm, who has steadied the light and the sky’s vault, and measured out the sphere of clouds in the mid-region. Who is the deity we shall worship with our offering?

Translation: It is He to whom heaven and earth, placed in the light by his grace, look up, radiant with the mind while over them the sun, rising, brightly shines. Who is the deity we shall worship with our offerings?

Translation: When the mighty waters came, carrying the universal germ, producing the flame of life, then dwelt there in harmony the One Spirit of the Devas. Who is the deity we shall worship with our offerings?

Translation: It is He who in his might surveyed the waters, conferring skill and creating worship – He, the God of gods, the One and only One. Who is the deity we shall worship with our offerings?

Translation: Father of the world – may He not destroy us who with Truth as his Law made the heavens and produced waters, vast and beautiful. Who is the deity we shall worship with our offerings?

Translation: Lord of creation! No one other than thee pervades all these that have come into being. May that be ours, for which our prayers rise, may we be masters of many treasures!

Look for other translations and try to understand this sūkta for in it lies the clue to finding the highest source of all knowledge, the jñāna yoga.

While it is good to study the sūkta and so many books and understand, it may not be an easy task. Traditions always have a root to every knowledge and this is the bīja mantra. Earlier we learnt that Klīṁ (Kṛṣṇa) is that highest source from which everything else must descend. In a similar manner the traditions rely on the one sound which symbolizes this knowledge as सौं (sauṁ). Let us derive this bīja. The three ‘s’ in Sanskrit symbolize the three śaktī as श (śa) ष (ṣa) स (sa) as icchā śaktī (desire), kriyā śaktī (action) and jñāna śaktī (knowledge) respectively. To the giver of knowledge jñāna śaktī स (sa) we add the manifested praṇava औं (auṁ) to get सौं (sauṁ), the bīja which causes the mind to be guided by the supreme intelligence.

The two Mahāvidyā Kālī and Tārā are associated with this supreme knowledge. What is that one mantra which can cause us to ascend beyond the realms of Brahma into this plane of supreme intelligence and immorality? Similarly, take word काल (kāla) and add the ascent sounds ऋ (ṛi) or री (rī) to it to get क्रीं (krīṁ) which is the Kālikā (or Kālī) bīja. Therefore क्रीं (krīṁ) is the highest knowledge, as knowledge alone can cause ascent and is called Kālī Mahāvidyā (Great Knowledge which removes all darkness). Similarly we have seen how Buddhi is depicted as feminine and is the cause of all creation like one who is bearing children, which is perfectly depicted by स्त्री (strī) meaning the bearer of children, wife, woman and it gives us the powerful Tārā Mahāvidyā स्त्रीं (strīṁ). In this manner we have not only derived but also understood the two Mahāvidyā – Kālī (क्रीं krīṁ) and Tārā (स्त्रीं strīṁ) as the givers of jñāna yoga and buddhi respectively.

In this the sage clearly brings out the essence of AUṀ (different from manifested auṁ having the guṇa) where he states that the first two vowels are Śiva and Śaktī and together they are the Mahātattva. Constant evolution occurs in a rhythm which is symbolized by the Śiva tāṇḍava dance and the impulse of the rhythm comes from Buddhi. Later the sage explains that Ṁ in AUṀ is the impetus that creates all māyā and the created māyā is also symbolized by the manifested ṁ in auṁ which is what is destroyed by the dance as it must destroy to create. 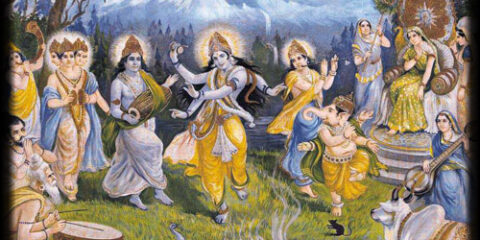 Śiva Tāṇḍava Stotram
Ahaṁkāra is a stumbling block to spiritual growth and mokṣa. When the mighty Rāvaṇa, King of Lanka, tried to dislodge... 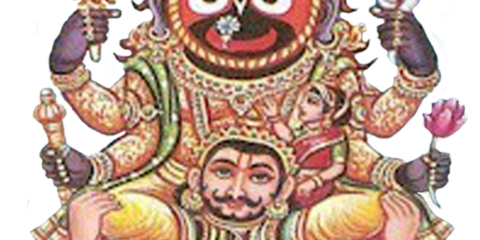 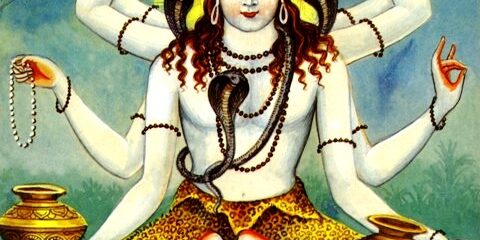 Maha Śivarātri Procedure
Fasting Procedure You are required to observe a fast on the day of Mahā Śivarātri. The very detailed procedure is...