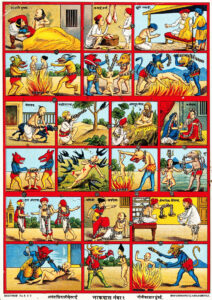 All that interests people about spirituality is anything linked to their future – nobody is bothered about the past. Only when we point out that the future is only an outcome of every decision and karma of the past that the interest in the past is revived but only to that limited extent. A natural point often made is that we can make amends and life-course corrections for the past and consequently the future event also changes.

If someone has committed a heinous crime like murder in the past life, and got away with it, would the universe conspire to punish him in the future? If your mind says that it’s his good luck that he escaped, then it’s not good logic as there can be no escape from evils we do nor shall our good work go unrewarded. All the good and evil deeds, thoughts, words and every action we do, forms the foundation of karma. Karma is the fate we create for ourselves as a consequence and effect of the action we do. By this logic, it is inevitable that the heinous crime of murder, the worst expression of hatred against nature and god, will surely be punished.

Now, this punishment can take place either in the heaven or hell we go to after death, or maybe in another life that follows the one in which the soul escaped the punishment for the sin. The latter would be the view of schools of thought that believe in reincarnation. Either way there is no escape from sin.

How do we know sin?

How do we know that what we are thinking or doing is sin? An easy way would be ‘the bible tells me so’ or the ‘Gita tells me so’. But does my intelligent brain accept that? If you are intelligent enough, then you are bound to question this and even shun it as ‘blind faith’. At this stage a very strange thing happens in human society. The pious priests and religiously inclined will mark you out as an evil person and will start to treat you like a social pariah. Simultaneously you will find similar intellectually inclined friends in ‘academics’ and such areas that are full of intelligent and courageous questioning minds. Even before you have realised you are sucked into one of these groups and start defending one against the other.

See what has happened to you. You had started the quest to search for the ultimate truth and were also a relatively intelligent person and all that you have ended up with, is defending one group against another. Both groups – the dim witted sheep and the super bright academics are equally stupid in the eyes of the omniscient one. Both have been ensnarled into indra-jāla, the net of māyā which is so strong in this kali yuga (age of darkness). Instead of pursuing their quest for true knowledge, they simply and blindly accepted either group as the ‘abode of their truth’ and are now aspiring to be group heroes.

Did we find sin? Of course not! we were too engrossed in defending our little ‘group’ fortress in the belief that all right and wrong is simply based on what the peer group views as right and wrong. We missed the path and have landed up in a new town that gave us some food and shelter, and which we claim to be our own. How did we forget that we came empty handed and will leave empty handed? It’s our fear of walking alone, the fear of loneliness that made us choose either group. We just forgot that the one who was always with us, who never allowed us to be lonely and afraid in the dark – the one the Hindus call ‘sarva-vyāpakeśa’.

So does anyone have any bright ideas about how to find what sin we have done? Oh yes! I have one – we need to start by understanding what sin really is and how it is committed. We need to start reading the Vedas and since that is śruti, the words of god untainted by human beings, it should have the answers. There is just one problem to this proposition.

The first group of priests and pious have taken the words of their elders blindly for so long that they have forgotten what the veda actually means. They simply translate each word and get a spiritual meaning out of every stanza and hymn and the deeper meanings and logic is missing.

The second group of academics colour their translations with their own prejudices and social backgrounds. One of the scholars thinks that Indra and the gods (devas) gained courage and strength by drinking soma – therefore, by [his] implication, soma must be the finest alcohol! Do people gain strength by drinking alcohol? Perhaps he has very little knowledge of medicine. This group of academics must be living in the ‘left-wing’ of the university and already have another battle with the ‘right-wing’ which is too scientific to their taste. The right wingers from engineering know it all. They ‘teach’ that “the ‘left-wing’ group come from the wrong end of the holy cow (tail) by which good fortune, they are blessed to spend their lives giving tons of bullxxxx. They are the only ones who get paid for doing nothing on this planet except manipulate the press”.

Oh my god! That’s nasty. Am I getting caught up again in another kali-yuga battle between the ‘right wing’ scientists, doctors, engineers and the ‘left wing’ academics, historians et.al.? Now at least I know that nobody knows the Veda. So the only option left is to learn a purāṇa. That’s easier to learn, at least some people know it and there has to be a beginning somewhere, sometime – so why not now.